First settled in 1840, the Onalaska area was a farming area until the 1904 arrival of the Carlisle Lumber Company sawmill. With the sawmill - the largest in Texas, Onalaska became an instant boom town and was larger than the nearby county seat of Livingston.

The name for the city comes from the poem, "The Pleasures of Hope", by the Scottish poet Thomas Campbell. When William Carlisle brought the sawmill to this area in 1904, he named the town Onalaska. Carlisle also named the towns of Onalaska, Wisconsin, Onalaska, Washington, and Onalaska, Arkansas (now defunct), where he started additional lumber mills. 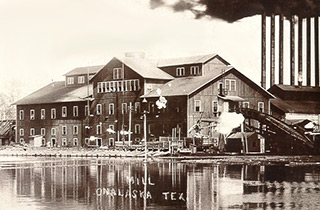 Shortly after the arrival of the sawmill, the town boasted two hotels, a movie theater, a large park, a hospital, a large downtown which included many stores, a cold storage plant, a bank, a railroad depot, and a large general store. The electricity for the entire community and the mill was supplied by two 150-kilowatt machines furnishing direct current.

The West Lumber Company purchased the sawmill in 1912, but the depletion of local timber led to the mill's closure in 1924. Although Onalaska remained a fairly active agricultural community, its boom days were over. By 1948 the population had dwindled to only 80 residents. The completion of Lake Livingston in 1968 started the local economy and population on the road to recovery, and Onalaska soon experienced its second "boom".

William Carlisle sent L.O. Jackson to Polk County, Texas in 1903 and, with the help of Judge J.E. Hill and R.T. Stone, he purchased thousands of acres of land between the selected mill site and Trinity, Groveton, Corrigan, and Livingston. The price paid for the land was approximately $5 per acre. This included land and mineral rights.

Mr. Jackson moved to Onalaska, Texas in 1904 to begin construction of the mill. He brought with him from Arkansas about 30 men, among whom were Oscar Agee, Phate Bailey, John Hayes, Dan Moore, and J.H. Wright, many of whose descendants are still members of the community today. 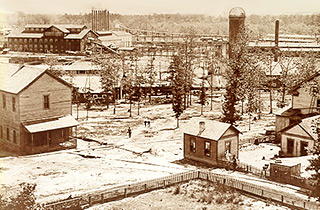 The married employees of the Carlisle-Pennel Lumber Company all had homes furnished to them by the company for $5 per month, which included lights and water. The salary was $300 per month, an amount unheard of back in those days. On pay days, the employees were paid in cash at the Onalaska Exchange Bank.

The railroad depot at Onalaska was located on Main Street about three-fourths of a mile south of the company store and had a sidewalk all the way to the store.

There was always lots of good clean fun, such as on the Fourth of July and Juneteenth when the lumber company furnished all the meat for the barbecues held in the one block square park. In the fall of the year carnivals, merry-go-rounds, and other amusement park rides would set up in the park.

Onalaska had two baseball teams, one white and one black. The company furnished the uniforms and the equipment. The teams would practice after work and play their games on Sunday afternoons and on holidays.

The electricity for the mill and community was supplied by two 150 kilowatt machines. Three artisan wells also supplied the water for the community as it flowed into a large wooden tank at the rear of the main office building.

The L.O. Jackson house, C.J. Rogan house, the large office building, and one of the hotels were located on Front Street, which ran East and West. The office building had living quarters upstairs for office and store personnel. The downstairs level housed the Onalaska Exchange Bank and vault, the bookkeeping and general offices, C. J. Rogan's office and the doctor's office.

The town had two hotels. One hotel had twenty-five rooms and large dining rooms. The other hotel had thirteen rooms and a dining room. Located between the hotels was a hospital that had six beds and a large operating room. The company store sold just about everything the people of the community ever needed. The Masonic Lodge was located over the store. The Post Office was located in the store also, but the Postal authorities requested it to be moved to the boiler house across from the main offices. That way, people could have access to postal facilities for twenty-four hours a day. The original post office had been located about one mile north of the community. 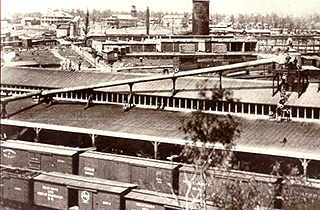 Across from Front Street to the south was the large boiler that furnished steam heat to the offices, the store, and the homes of L. 0. Jackson and C. J. Rogan. Also across the street was a twenty-ton ice plant that furnished ice for all the mill's needs as well as ice delivery to the homes. Ice was priced at ten cents for fifty pounds. The plant had underground lines that ran up to the company story to the twelve walk-in coolers that were kept at around thirty degrees. The coolers were in the meat market which had four train car loads of meat shipped from Kansas each month.

There were other businesses located in Onalaska that were not company-owned or connected. A.S. Smith and his son Jerry bought a tract of land south of Bushy Creek and put in a feed and grocery store. Dick Alston, Sr. had charge of the blacksmith business and also did in-the-woods repairing, mule shoeing, saw repairs and other repairs pertaining to farm and lumber machinery. Wiley and Keenan Peebles owned and operated the tin shop and put gutters on all the houses on Front Street and the hotels.

Robert Thompson had the first and only auto garage located on the west side of Main Street. There was also a two-room schoolhouse on the site where the Baptist Church is now. The school had three teachers. Professor J.H. Taylor was the principal. There were also two doctors, a bakery, and a three-chair barbershop.

Mr. Carlisle donated a plat of land south of Onalaska to the Methodist Church. They built a church on the plot that was deeded to them, with the understanding that Mr. Jackson would be on their board of directors so that the property would be protected from any misuse and would not be sold for any other purpose. This raised quite a row since W. Jackson was a senior deacon in the Baptist Church at the same time. 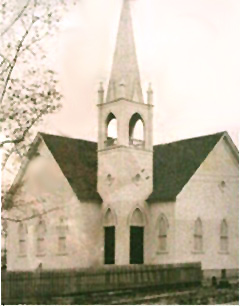 The railroad depot at Onalaska was located on Main Street, about three-fourths of a mile south of the company store. There was a wooden walk from the depot all the way to the store. On special days, like the Fourth of July and County Fair Day in Livingston, the railroad would run excursions to Livingston in three flat cars which had built-in bench seats on either side of the cars. Large cans of ice water were supplied in the center of each car. The trips would begin at 6:00 a.m. and returned at midnight.

The Carlisle company sold the Onalaska sawmill in 1909 to Jim M. West from Houston for four million dollars. West rebuilt the mill after it was devastated by a fire in 1915. The mill continued to operate until the end of 1928 when the timber was depleted and the town settled into a long slumber from which she was awakened in 1968 by the kiss of water from Lake Livingston.

Large restored pictures of the original community are hanging in the City Hall council meeting room and the Onalaska Library.

Historic WBT&S Videos  - Taken by John Frank in about 1958, just a year before the WBTS was shut down.